WHO ARE YOU VOTING FOR?

"So, Kittyko, who are you voting for?" asked an 8-year-old student as she was opening her piano book.

As I prepared an adult-y, neutral non-answer, her slightly older sibling quickly told her that she's not supposed to ask people that.

"Oh. Why not?" she asked, perplexed as to why adults have rules for not talking about the most important things. Eyes wide, she looked up at me. I realized that I now had two questions to figure out how to address.

"Because it's not polite," said her older sister.

"But why? Some people like Hillary Clinton and some people like Kevin Cramer...or wait," she said, trying remember how we adults have arranged things.

It was clear that this was not going to morph smoothly into page 23 and "The Singing Piano Pumpkin," so I said, "Well, some people like things that both Kevin Cramer and Heidi Heitkamp have said and done, and some people don't like things they've said and done. I'll be thinking a lot about all of those things when I do vote. Sometimes people like to just think about that stuff privately," I said...knowing that children generally cannot be tricked with non-answers.

"But who will you vote for?"

And then I remembered the ultimate avoidance strategy that children have perfected--answer a question with a question. "Is your school going to have mock elections? Like when the kids get to cast a vote?" I countered.

"No, not this time. But most kids just vote how their parents vote," she said casually, even with a little shrug.

"Oh, I can see how that could happen," I replied, trying to find neutral ground with my sweet interrogator.

"I don't think it needs to be a secret," she said. "I mean, what's wrong with telling people that my family is voting for [name redacted and not the one I'm voting for]?" she earnestly replied while looking up at me.

This prompted a theatrical groan from Older Sister, which caused my inquisitive student to wonder if she was going to be judged by me for possibly saying something bad.

Through my smile and nod (which was authentic), I told her that voting is a wonderful thing, and I asked her if she's looking forward to voting some day. With a "that's-so-yesterday" shrug, she explained that she's voted lots of times, like when they were trying to decide if their classroom reward would be a pizza party or extra recess. And that even though she voted for pizza, she was still going to be friends with ones who voted for an extra recess.

Yup, she gets it.

Note that while this may seem like a long, drawn out conversation--especially when children are there for a music lesson--it really lasted only a minute or so. Although it's true that lessons are not the place for political discussions, it's also no secret that we are in some turbulent times. And kids have questions--and they still haven't yet figured out that adults don't have all the answers.

But we can model. Even if we don't have answers or solutions, we can still be kind. We can model how to listen, be respectful, or how to draw a boundary if we prefer not to talk about it.

And how to keep making music in the chaos.

A BRUSH WITH FAME

You're never too old (or young) for music. Just ask Merv, a retired businessman who is now learning ukulele with me.

Merv has done quite a few things for a living. "Have I told you about my brushes with fame?" he asked one day, eyes twinkling.

When Merv lived in Seattle, he owned a company that made signs. One day a couple young fellows gave him a logo and asked him to make a sign, which, judging by the logo, must have been for a restaurant--so he thought.

He made the sign and brought it to the guys, saying, "Well, I think the logo and sign are great. It'll show your customers that the subs are ordered on that side of the counter, and the pop is over there," referring to the arrows on the sign.

The two guys burst into laughter and explained that they are actually about to open a record store and are trying to start a recording studio and label, not a restaurant.

Then they took Merv on a little tour of a room that they were hoping to turn into a studio, where he saw some grungy fellows playing and singing something about teen spirit....

The two young guys were actually businessmen who had a vision to create a big Seattle music scene. They wanted to build the next Motown or California Sound type of thing, so they envisioned the "Seattle Sound" as something they could create--and market.

They rounded up some local bands, and let's face it: Every town is loaded with talent. But these guys wanted to capitalize and were eager to get to work. So they eventually got some bands together in the studio and recorded with an engineer who mixed the songs similarly (with EQ and such). Eventually, the recordings were, indeed, engineered and marketed to have a similar sound--what eventually became known as the Seattle Sound.

If you've heard of Nirvana or Sound Garden, or any grunge band from the 90s, you've heard the Seattle Sound. Their company, Sub Pop, has become one of the most influential labels in American popular music. (Click the pic to scroll through these legends and current artists if you're interested.) 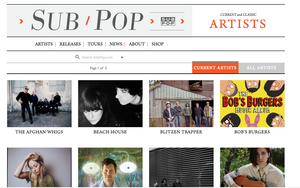 So Merv unknowingly stumbled upon some business visionaries and music legends that day when he delivered his sign many years ago; he was one of the first people in the world to hear the crazy scheme of these young guys to build a music empire with no money...but with lots of ideas and readiness to work hard.

You just never know who you might meet on any given day.

And you never know if your crazy dreams and schemes will result in anything unless you try. :)

WANT TO BE A GENIUS? 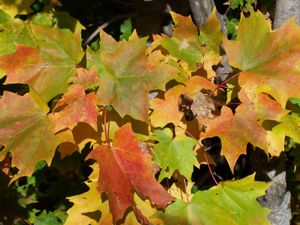 I see genius every day, and sometimes I am fortunate to actually witness a student discover her/his genius in any given moment.

She takes on challenges and blows through them like autumn leaves ready to take flight. And she does it at a pace that is enjoyable for her.

Over the past month, she recorded a few piano tracks for a song and added vocals. Then came time for mixing the tracks.

Usually when it's time to mix, students prefer to watch and let me mix with their input, of course.

But A looked ready to sit in the engineer's chair.

Within one minute, she was cutting, pasting, copying, splitting, adding a new track, adjusting the length of clips, adjusting volumes--ALL WITH ONE HAND and without previous experience or tutoring from me.

Do you know how she was able to do this? See paragraph 3.

I learn a lot from my students. From this student, I've learned that "genius" is as unique as an autumn leaf--and it may or may not be about ability or accolades. But it's most certainly about some things we all have access to:  curiosity and giving it a try. Sometimes we give it a try and it doesn't turn out. Sometimes we end up "mixing" a wonderful work of art--but that's not the point. Genius can be in the how.

Let A inspire you today. Put your hand in there and be a genius.